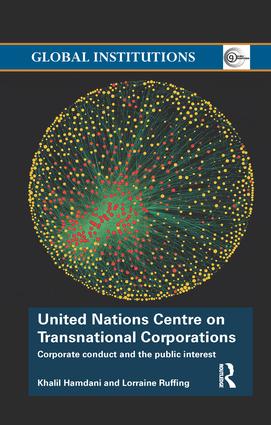 The United Nations Centre on Transnational Corporations (UNCTC) was established in 1975 and abolished in 1992. It was an early effort by the UN to address the overlapping issues of national sovereignty, corporate responsibility and global governance. These issues have since multiplied and deepened with globalization. This book recounts the UNCTC experience and its lessons for international organizations.

This book is not only an insider perspective by two former staff but also a collective memoir of the UNCTC as an international organization that attempted with varying success to defuse the clash between corporates and states that erupted in the turbulent 1970s. This personal account of the UNCTC is a mixture of history, analysis, reflections, and critical commentaries, told in different voices that penetrate the bland persona of international civil service. In this retelling, the authors seek to address misconceptions amongst the more general literature and to seek to provide accounts of both its positive and negative features.

The UNCTC experience recounted in this book holds valuable lessons for international organization and will be of interest to student, scholars and practitioners alike.

"This solid piece of research helps us understand the difficulties in addressing the governance gap with respect to the global influence of corporate power that Salvador Allende denounced, and nowadays epitomized by the care taken to protect ‘too big to fail’ international banks at the heart of the financial crisis that is still with us."

"UNCTC was one of the innovative initiatives in the 1970s. Among its contributions was support to countries making their debut as host states for foreign investment. Need to promote corporate social responsibility now features in the agenda of corporations and governments. Cessation of its operations created a void that has been difficult to fill."

"UNCTC successfully assisted developing countries in negotiating with foreign investors. Several organizations attempted to serve the same needs. They are much more likely to succeed if their managers learn from the UNCTC experience. The authors of this book know the inside stories, and tell them."

Khalil Hamdani was chief of the UNCTC executive office and later the director of the programme. He is a graduate of the Johns Hopkins University and holds a PhD in Economics from Georgetown University. He served 29 years with the United Nations. He created the UN work on investment policy reviews, which was declared a "valuable mechanism" by the G-8 Heads of State Summit in 2007. The related series of investment blue books received the Smart Regulation Africa Investor Award in 2007, and in 2005. He has provided policy advice and training to investment officials in Africa, Asia, the Middle East and Latin America. He has interacted with governments at the highest level. He is a frequent speaker at conferences and is a member of several advisory councils. He has prepared many UN reports, published journal articles and is co-editor of a book on The New Globalism and Developing Countries, co-edited with John Dunning, which was a 1997 best seller for the United Nations University Press and reprinted for the Asian market. He was one of the drafters of the Human Development Report 2013: Rise of the South. His recent publications also include commentaries in the Annual Review of United Nations Affairs published by the Oxford University Press in 2012 and 2013.

Lorraine Ruffing worked for five different United Nations agencies over the last 22 years. Previously she worked for the US Senate and taught at major universities. She holds a PhD in Economics from Columbia University. She led the work of the UNCTC Intergovernmental Working Group of Experts on International Standards of Accounting and Reporting (ISAR) and also headed up the work on enterprise development. She helped open the UN office in Tashkent where she served as UNDP Deputy Resident Representative. Her recent activity includes preparation of the OECD annual publication on "Financing SMEs and Entrepreneurs" which documents their access to finance before, during and after the financial crisis. She has written university level courses on corporate governance and critical articles on the deficiencies in corporate social responsibility disclosure.