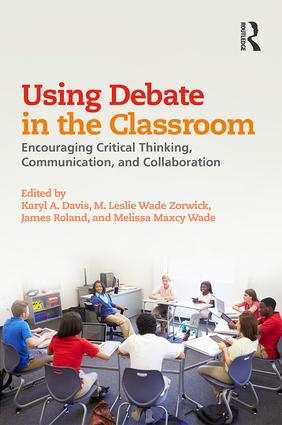 Using Debate in the Classroom

Debate holds enormous potential to build 21st century skills such as critical thinking, communication, collaboration, and conflict resolution in the K-12 classroom, but teachers often struggle to implement and contextualize it effectively. Using Debate in the Classroom draws on research from a variety of academic disciplines to explain the benefits of debate across subject areas, and describes how teachers can use debate to enliven their curriculum and support the aims of the Common Core. Topics include:

Appendices provide a variety of tools to assist K-12 teachers in implementing debate in the classroom, including ready-made debate activities, student handouts, and a step-by-step guide to introducing students to debate in just one week.

"Using Debate in the Classroom proves that the art of evidence-based argumentation through debating can change a student's life. The authors take a deep and thoughtful approach to helping us better understand the necessity for the cross-curricular application of evidence-based argumentation. This book makes clear how debating can serve as a primary tool for students to gain the 21st century skills necessary to break down barriers, overcome challenges, and build the drive and motivation necessary for achievement." –J. Scott Wunn, Executive Director, National Speech and Debate Association

“This is it -- an introduction to classroom debate that will forever change pedagogy! We learn in this volume that debate is for all disciplines, science to literature. We learn that it is the antidote to socially mediated conformity and prejudice. Critical thinking and social engagement in a poly-cultural environment is its outcome. Moreover, the appendix is a ‘how-to’ manual for making it happen. No one can read this book and not be transformed.” --E. Culpepper Clark, Dean Emeritus, Henry W. Grady College of Journalism and Mass Communication, University of Georgia

An Introduction to Classroom Debate: A Tool for Educating Minds and Hearts

1. Take No Prisoners: The Role of Debate in a Liberatory Education

5. Discerning the Value of Information in the Digital Age

10. Creating Hospitable Communities: Remembering the Emanuel 9 as We Foster a Culture of Humility and Debate

directs communications for the Glenn Pelham Foundation for Debate Education and is the owner and principal creative of the consulting firm kd Alice Communications.

is Associate Professor of Psychology at Hendrix College.

is Senior Director of Community Programs and Engaged Scholarship at the Barkley Forum Center for Debate Education at Emory University.

is President of the Glenn Pelham Foundation for Debate Education.