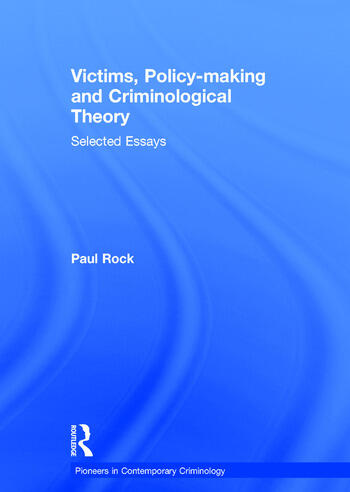 Paul Rock began studying sociological criminology in 1961 and his intellectual history has run parallel to and in conversation with the evolution of the discipline over that long period. He became a professional scholar when symbolic interactionism, sociological phenomenology and 'labelling theory' were taking form within criminology, and it is to those ways of viewing the social world that he still clings, although he has sought also to reflect critically upon them as time went by. Having completed a DPhil dissertation on debt collection as a moral career, and largely as a matter of serendipity, he was to take to empirical research just as policies for victims of crime were being developed by governments across the developed world and, finding himself embedded as a visitor in a Canadian federal criminal justice ministry when a federal-provincial task force was being mooted, he was able to embark on the first of a sequence of field studies of policy-making centred chiefly on victims. Those two interlaced preoccupations, theoretical and empirical, continually informed much, if not all, of his subsequent work, contributing to what has been, in effect, a running series of comparative ethnographies of government decision-making about the role of the victim in and around the criminal justice system.

Contents: Introduction; Published writings; Observations on debt collection; Some problems of interpretative historiography; Law, order and power in late 17th and early 18th century England; Governments, victims and policies in 2 countries; The present state of criminology in Britain; Witnesses and space in a Crown court; Introduction: the emergence of criminological theory; The social organization of a Home Office initiative; The opening stages of criminal justice policy making; Sociology and the stereotype of the police; Murderers, victims and 'survivors': the social construction of deviance; Victims, prosecutors and the state in 19th century England and Wales; Chronocentrism and British criminology; Aspects of the social construction of victims in Australia; Urban homelessness, crime and victimisation in England (with Tim Newburn); Treatment of victims in England and Wales; Name Index.

Paul Rock is Professor of Social Institutions in the Department of Sociology, London School of Economics and Political Science, UK

'...for those who wish to gain an in-depth knowledge of the application of social constructionist ideas within the area, primarily of victimology,this book would be highly recommended.' Policing