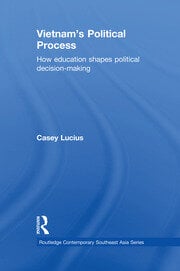 In a system that is known for its covert political style, Vietnam’s decision making process is often described as either consensus-based or simply confusing and inexplicable. This book provides an approach to understanding political decision making in Vietnam by recognizing enduring values that are derived from State-controlled education and official historical narratives.

The nation’s official historical narrative has led to the development of protected values that are called upon during political decision making. In order to secure these values, such as regime stability, national independence, and social order, officials must act within accepted rules of appropriate political behavior. The book shows that through State-run education, mandatory defense training, and membership in mass organizations, Vietnamese citizens are taught social and political ethics, and their identity is moulded in concert with this process.

Using textbooks and education to understand the underlying values within Vietnam’s society is used as the contextual framework for two case studies - the problem of landmines and the on-going threat of avian influenza - which examine how authorities frame problems, negotiate, and deal with potential crises.

This book will be of great interest of academics and students within Asian studies, but also for policy makers involved with the country and those doing business in Vietnam, including non-governmental organizations, private businesses and charitable groups.

1. Introduction  2. A Historical and Cultural Framework  3. Review of Vietnamese Text Books and Defense Education  4. A Case Study on the National Landmine Impact Survey in Vietnam  5. A Case Study on Vietnam’s Response to Avian Influenza  6. Comparison and Analysis of Two Case Studies  7. Other Things to Consider about Decision Making in Vietnam  8. Conclusion

Casey Lucius is an Associate Professor at the Naval War College, Monterey, California and was the operations assistant to the US ambassador to Vietnam.