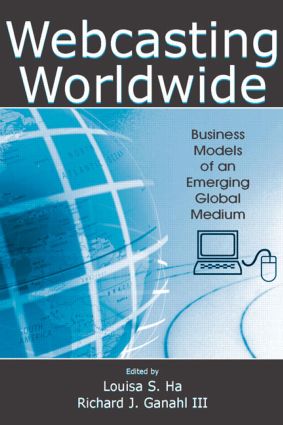 Webcasting Worldwide tackles one of the most timely topics in mass communication today—the delivery of audio and video content via the Web, or webcasting—employing a global perspective to explore the subject. It is unique in providing a theoretical framework by which to analyze business models of emerging media, and it also examines the business practices of leading webcasters in the world’s most developed broadband markets. With webcasting in its early development, the approaches discussed in this volume set the standards for the webcasting industry.

Representing the major broadband markets in the world, this text is an authoritative and valuable reference for both researchers and practitioners. The chapters relate the business practices of webcasting to the media market environment and established media industries, such as television and radio, as well as government and non-profit organizations. A CD-ROM accompanies the book, offering PowerPoint charts for use in training, education, and research, along with tables, graphs, screenshots, and hyperlinks.

Webcasting Worldwide is essential reading for academic researchers and media industry practitioners, and the volume will be a useful text in advanced courses addressing media technology, media management, and international communication.

For updates about the book chapters and latest commentaries on topics related to webcasting business models, please visit the Webcasting Business Models Blog at http://webcastingworldwide.blogspot.com

Winner of The Association for Education in Journalism and Mass Communication Picard Award for Media Management and Economics 2007.

"'Webcasting Worldwide: Business Models of an Emerging Global Medium' is a definitive work, the book's authors, Louisa Ha and Richard Ganahl III have made a significant contribution in facilitating mainstream understanding of the burgeoning webcasting sector and the promise it holds. It couldn't have come at a better time." —Streamingmedia.com

“Webcasting presents an intriguing opportunity to view a new content business emerging and maturing. This book provides an important foundation for understanding that development and the strategies and approaches being taken by the foremost operators in the field today. It is an important waypoint for those who wish to understand the industry today and for those who will study its development in the future.” —Robert G. Picard, Editor, Journal of Media Business Studies

From Industry Insights in this volume:

“Through their tireless efforts in producing this manuscript, [the editors] have made a significant contribution in facilitating mainstream understanding of the burgeoning webcasting sector and the promise it holds. It couldn’t have come at a better time.” —Dave Gardy, Chairman and CEO, TV Worldwide, President, International Webcasting Association

"Through their ground-breaking new book, Webcasting Worldwide, Louisa Ha and Richard J. Ganahl III have provided a thoughtful and thorough examination of the business models taking shape in the online delivery of media. Webcasting Worldwide offers the reader a rich diversity of viewpoints and experiences from North America to Europe, Asia to the Middle East. Detailed analysis of the broadband marketplace and how it is being financed around the globe is at the heart of this important book. Adding to the value of this useful text is the authors' blog, webcastingworldwide.blogspot.com. Anyone interested in either the major trends or latest developments in the world of broadband media will find Ha and Ganahl's Webcasting Worldwide required reading." —John V. Pavlik

L. Ha, Application of the ACR Framework in a 13-Country Study of Leading Webcasters.

L. Ha, The United States: The World’s Largest Broadband Market in the World.

P. Bakker, The Netherlands: Webcasters in a Public Broadcasting Environment.

A. Arampatzis, Greece: Webcasting Is Slowly Taking Shape as an Industry.

A. Rolland, C.B. Monsen, Norway: The Clicks-and-Bricks Have Taken the Lead.

A.Y.L. Lee, C.Y.K. So, Hong Kong: The Crown Jewel of Broadband for China With the Second Highest Broadband Penetration in the World.

N.D. Weerakkody, Webcasting in Australia: "Pretty Dead, Really"—or Is It?

I. Allagui, C. Martin, The Arab World: The Broadband Market Is Taking Off—How Far Away Is Webcasting?

L. Ha, R. Ganahl, Lessons From the Leading Webcasters Around the World and the Outlook of Webcasting as an Emerging Global Medium.

The purpose of the Media Management and Economics book series is to provide a central resource on topics related to the areas of media management and economics. Books in this series will cover a range of topics involving industry studies, research, edited volumes, and theoretical/methodological contributions, and include both textbooks for upper level undergraduate and graduate courses, as well as scholarly and professional works and some reference volumes.