What is Scientific Knowledge?
An Introduction to Contemporary Epistemology of Science 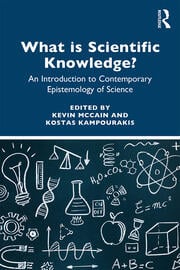 What is Scientific Knowledge?: An Introduction to Contemporary Epistemology of Science

What Is Scientific Knowledge?

is a much-needed collection of introductory-level chapters on the epistemology of science. Renowned historians, philosophers, science educators, and cognitive scientists have authored 19 original contributions specifically for this volume. The chapters, accessible for students in both philosophy and the sciences, serve as helpful introductions to the primary debates surrounding scientific knowledge. First-year undergraduates can readily understand the variety of discussions in the volume, and yet advanced students and scholars will encounter chapters rich enough to engage their many interests. The variety and coverage in this volume make it the perfect choice for the primary text in courses on scientific knowledge. It can also be used as a supplemental book in classes in epistemology, philosophy of science, and other related areas.

* addresses several questions that students and lay people interested in science may already have, including questions about how scientific knowledge is gained, its nature, and the challenges it faces.

Part I: How is scientific knowledge generated?

1. How many scientists does it take to have knowledge? Jeroen de Ridder

2. What attitude should scientists have? Good academic practice as a precondition for the production of knowledge  Thomas A.C. Reydon

4. How do explanations lead to scientific knowledge? Kevin McCain

5. What is scientific understanding and how can it be achieved? Henk W. de Regt and Christoph Baumberger

Part II: What is the nature of scientific knowledge?

6. What are scientific concepts? Theodore Arabatzis

7. How can we tell science from pseudoscience? Stephen Law

10. Can scientific knowledge by measured by numbers? Hanne Andersen

Part III: Does bias affect our access to scientific knowledge?

12. Do our intuitions mislead us? The role of human bias in scientific inquiry Susan A. Gelman and Kristan A. Marchak

13. Can scientific knowledge sift the wheat from the tares? A brief history of bias (and fears about bias) in science Erik L. Peterson

14. What grounds do we have for the validity of scientific findings? The new worries about science Janet A. Kourany

16. Should we trust what our scientific theories say? Dana Tulodziecki and Martin Curd

17. What are the limits of scientific explanation? Sara Gottlieb and Tania Lombrozo

18. Should we accept scientism? The argument from self-referential incoherence Rik Peels

19. How are the uncertainties in scientific knowledge represented in the public sphere? The genetics of intelligence as a case study Kostas Kampourakis.

Kevin McCain is Associate Professor of Philosophy at the University of Alabama at Birmingham, USA. His published research includes Evidentialism and Epistemic Justification (2014), The Nature of Scientific Knowledge: An Explanatory Approach (2016), and, with Kostas Kampourakis, Uncertainty: How It Makes Science Advance (2019).

is a researcher in science education and a lecturer at the University of Geneva, Switzerland. His most recent authored books are Making Sense of Genes (2017), Turning Points: How Critical Events Have Driven Human Evolution, Life and Development (2018), and, with Kevin McCain, Uncertainty: How It Makes Science Advance (2019). He has also co-edited, with Michael Reiss, Teaching Biology in Schools: Global Research, Issues and Trends (2018).

"What is Scientific Knowledge? is a thoughtfully complied, wide-ranging, up to the minute collection of essays that is at once a tremendously valuable educational tool and a brilliant way for any philosopher to catch up with what is going on right now in the philosophy of science."
Michael Strevens, New York University

"This is an excellent volume. The editors have managed to put together a collection of chapters that is both informative and readable - no mean achievement when it comes to philosophy of science! I got a lot from reading this book."
Michael Reiss, University College London

Review in Metascience (2020):
Overall, the volume achieves its stated ends and it should prove useful for early undergraduate courses in scientific epistemology. Moreover, researchers interested in many of the topics contained therein will find contemporary papers worthy of consideration for their own research. Finally, for philosophers who are too busy to stay up-to-date with contemporary discussions in the various subfields of philosophy of science they are not a part of, this volume will provide an easy remedy."
Jamie Shaw, University of Toronto