Women Miners in Developing Countries
Pit Women and Others 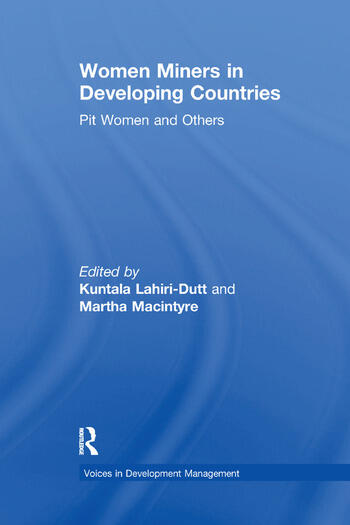 Women Miners in Developing Countries: Pit Women and Others

Contrary to their masculine portrayal, mines have always employed women in valuable and productive roles. Yet, pit life continues to be represented as a masculine world of work, legitimizing men as the only mineworkers and large, mechanized, and capitalized operations as the only form of mining. Bringing together a range of case studies of women miners from past and present in Asia, the Pacific region, Latin America and Africa, this book makes visible the roles and contributions of women as miners. It also highlights the importance of engendering small and informal mining in the developing world as compared to the early European and American mines. The book shows that women are engaged in various kinds of mining and illustrates how gender and inequality are constructed and sustained in the mines, and also how ethnic identities intersect with those gendered identities.

Kuntala Lahiri-Dutt is a Research Fellow at the Research School of Pacific and Asian Studies at The Australian National University, Australia. She has researched gender and mining since 1993 in the eastern Indian collieries and in the small quarries in India and elsewhere in South Asia. Since 2004, she has also worked on the gender concerns in the mining industry of Indonesia. Kuntala has been active in the recent initiatives taken up by both the non-governmental organizations and international agencies operating at different levels on the mainstreaming of gender issues in mining. Martha Macintyre is a Senior Lecturer in Medical Anthropology at The University of Melbourne, Australia. She has held research positions at Monash University and the Australian National University, and taught in Anthropology and Women's Studies at La Trobe University. Over the last twenty-five year's research in Papua New Guinea Martha has published numerous articles on women and gender. She has been monitoring the social and economic impacts of the Lihir goldmine since 1995.

’The essays in this collection provide a timely and powerful critique of the assumptions commonly made about gender relations and the marginalisation of women in communities and regions where mining is the main form of economic activity. They are essential reading for anyone interested in the complex relationships between industry, gender and development.’ Dr Colin Filer, The Australian National University, Australia ’Women Miners in Developing Countries makes an important contribution by bringing attention to gender aspects of mining, which today are unrecognized by much of the global industry. The book demonstrates that in the past women miners have all too often been second class citizens and it is time to create a level playing field. The book is important for all who are concerned to see the mining industry provide employment opportunities that contribute to poverty alleviation and sustainable development. I highly recommend the book...[it] points the way forward with contemporary examples of how women's status and work activities in mining can be given the due respect that they deserve.’ John Strongman, Mining Adviser, Oil, Gas, Mining and Chemicals Department, World Bank, USA ’Women Miners in Developing Countries: Pit Women and Others makes a solid contribution to the evolving body of literature on extractive industries and gender. Its 17 chapters...are rich in detail on the role of women in the mining industries in Bolivia, India, Indonesia, Korea, Japan, Malaysia and Papua New Guinea.’ Development in Practice '...this volume is an excellent revelation on women miners who face down social, economic and political norms in order to earn a living.' Journal of Contemporary Asia