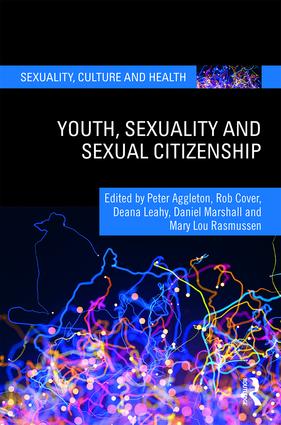 Sexual citizenship is a powerful concept associated with debates about recognition and exclusion, agency, respect and accountability. For young people in general and for gender and sexually diverse youth in particular, these debates are entangled with broader imaginings of social transitions: from ‘child’ to ‘adult’and from ‘unreasonable subject’ to one ‘who can consent’. This international and interdisciplinary collection identifies and locates struggles for recognition and inclusion in particular contexts and at particular moments in time, recognising that sexual and gender diverse young people are neither entirely vulnerable nor self-reliant.

Focusing on the numerous domains in which debates about youth, sexuality and citizenship are enacted and contested, Youth, Sexuality and Sexual Citizenship explores young people’s experiences in diverse but linked settings: in the family, at school and in college, in employment, in social media and through engagement with health services. Bookended by reflections from Jeffrey Weeks and and Susan Talburt, the book’s empirically grounded chapters also engage with the key debates outlined in it's scholarly introduction.

This innovative book is of interest to students and scholars of gender and sexuality, health and sex education, and youth studies, from a range of disciplinary and professional backgrounds, including sociology, education, nursing, social work and youth work.

Chapter 4. Lawrence ‘Larry’ King and too muchness: Complicating sexual citizenship through the embodied practices of a queer/trans student of colour

Chapter 5. Beyond cultural racism: Challenges for an anti-racist sexual education and youth

Chapter 7. Divergent pathways to inclusion for transgender and intersex youth

Chapter 9. Constraints and alliances: LGBTQ sexuality and the neoliberal school

Chapter 10. Twenty years of ‘cyberqueer’: The enduring significance of the Internet for young LGBTIQ+ people

Chapter 11. Taking off the risk goggles: Exploring the intersection of young people’s sexual and digital citizenship in sexual health promotion

Chapter 12. Queer youth refugees and the pursuit of the happy object: Documentary, technology and vulnerability

Chapter 17. ‘Some teachers are homophobic, you know, because they just don’t know any better’: Students reimagining power relations in schools.

Chapter 18. The proliferation of gender and sexual identities, categories and labels among young people: Emergent taxonomies

is an associate professor in media and communication in the School of Social Sciences at The University of Western Australia.

is a senior lecturer in health education in the Faculty of Education at Monash University in Melbourne, Australia.

is a senior lecturer in literature in the School of Communication and Creative Arts at Deakin University in Melbourne, Australia.

is a professor of sociology in the College of Arts and Social Sciences at The Australian National University in Canberra, Australia.