As part of our new behind-the-scenes series of blog posts which share insights into our authors’ writing processes, in this post we’re delighted to share an interview with Richard Brath, author of Visualizing with Text.

Read on to find out how Richard completed a PhD while working full-time, how he organised the book, and how the cover design process worked.

How did you complete a part-time PhD while working?

This is a really good question. I had previously completed a part-time MA degree in the 1990s which unfortunately took 6 years. Doing any kind of independent research, it’s easy to fall into a hole where you get side-tracked on something not important, over-work some code more than necessary, design a poor experiment, complete a task without being aware of prior work, and so on. So, when I started the PhD, I specifically made a list of things to avoid/improve so that I wouldn’t fall into the same trap as before:

In case it’s not obvious yet, rapid iteration with frequent feedback is at the core of almost all the above tasks. Essentially, it’s about putting in place mechanisms to keep you on track, guided and focused.

I’d previously created a book with David Jonker in 2015. It was a lot of work. With lots of visuals and text, a word processor is pretty good to see a page or two, but you don’t see the whole thing. To get a sense of the book, I printed out a rough draft and taped it up on the wall of our basement. It helped a lot in terms of figuring out how to move things around. Similarly, over the course of the thesis and for Visualizing with Text, I wanted to get a better sense of how everything fitted together, not just page by page views. So this time I invested in a 32″ 4K monitor. I could look at, and read, 12 pages at a time. That was good for working on chapters and sections, and to see how groups of images worked together. An unexpected side effect was that this large monitor allowed me to sketch out many different alternatives on the screen to help bring together and organize many aspects of the work.

Before reworking everything on screen or in printouts, the process often starts with some lists and diagrams on paper. I don’t have many of the rough scribbles, as the loose paper tends to get thrown away. Here’s a few sheets that haven’t hit the trash yet:

The crux of the book relies on creating an organized design space for all the bits and pieces of text being used within visualization. Over the last 7 years, pieces emerged by looking at historic examples, talking with experts in different fields, creating bits of code and noting what worked or failed and so on. The organization of these different pieces into a whole was emergent: it was not a linear process.  There were false starts, things that sort-of worked but not quite, and even when the organization got close to the final form, there were many tweaks and variants. I spent many weekends over many years on a few diagrams that organized everything: text and visualization. In effect, these iterative diagrams represent a research through design process. The effort for these diagrams surpassed the writing effort associated with a chapter.

Here’s a diagram of the many iterations, as a timeline, where you can see some historic starting points, successive iterations, and a few dead-ends. You can see near the end, the diagrams become bigger and more complex: 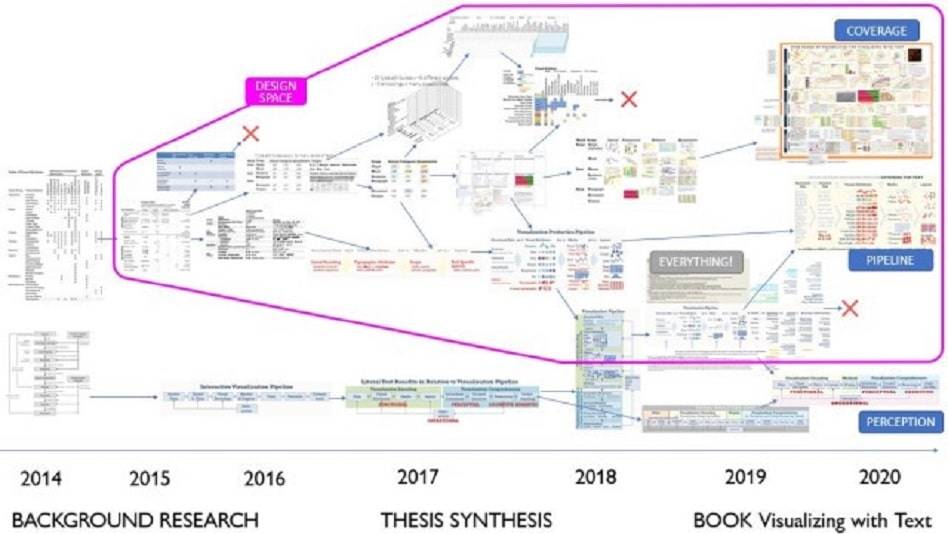 The design space is the first third of the book. The rest of the book is all about new kinds of text visualizations, heavily illustrated with example visualizations that I’ve created. In late 2019, I had a lot of the content, but I didn’t like how it was fitting together and felt that there were still some gaps. Some of the content was orphaned, some was duplicative, and so on. Furthermore, some examples were throwaway and could have been better constructed to link to broad themes in the book.

At this point, I decided to take one image from each of the examples, create a map of the existing book, and then scribble over top where things should move into different groupings, items to remove, items to add, items that were missing. 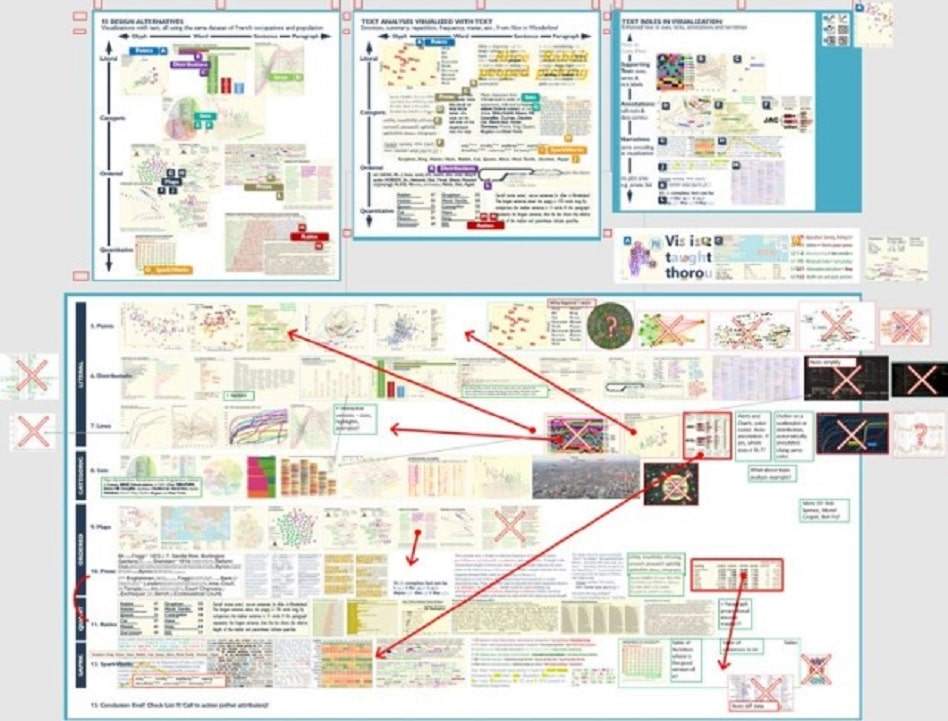 The lower half of the above screenshot represents all the examples in the final 8 chapters. In the upper half are some reference images that organize, structure and introduce these 8 chapters. The book evolved into Visualizing with Text  instead of Text in Visualization, because through these design processes I realized that the design space was bigger than the traditional palette of what most people think of as visualization today. This process was stressful, because it meant re-writing sections that had already been written, and there was a looming deadline. But, in the end, I am much happier with the result. And I think the extra pixels helped with this reorganization more effectively than rearranging pages or post-it notes on a wall.

Designing the Book Cover for Visualizing the Text

With the interior of the book submitted in April, it became time to focus on other aspects of the book, such as endorsements, cleaning up images, cleaning up code, creating a companion website and designing a real cover! One of the early reviewers of a draft version of the book was John D. Berry, a typographer and designer I’d met at a conference during my PhD. John graciously offered to create the cover and I jumped at the opportunity. We would need to follow the publisher’s template, given the book is one in the AK Peters Visualization Series edited by Tamara Munzner (which I am honoured to be a part of).

John created many different covers, some based on content from the book, some based on contemporary typographic art, and some using historic images. John recommended an abstract approach, suggestive of the interior content, using large images, so that it might stand-out both on a shelf in a bookstore and on-line in a browser. That matched with my own preferences for high-contrast, clean modernist designs. 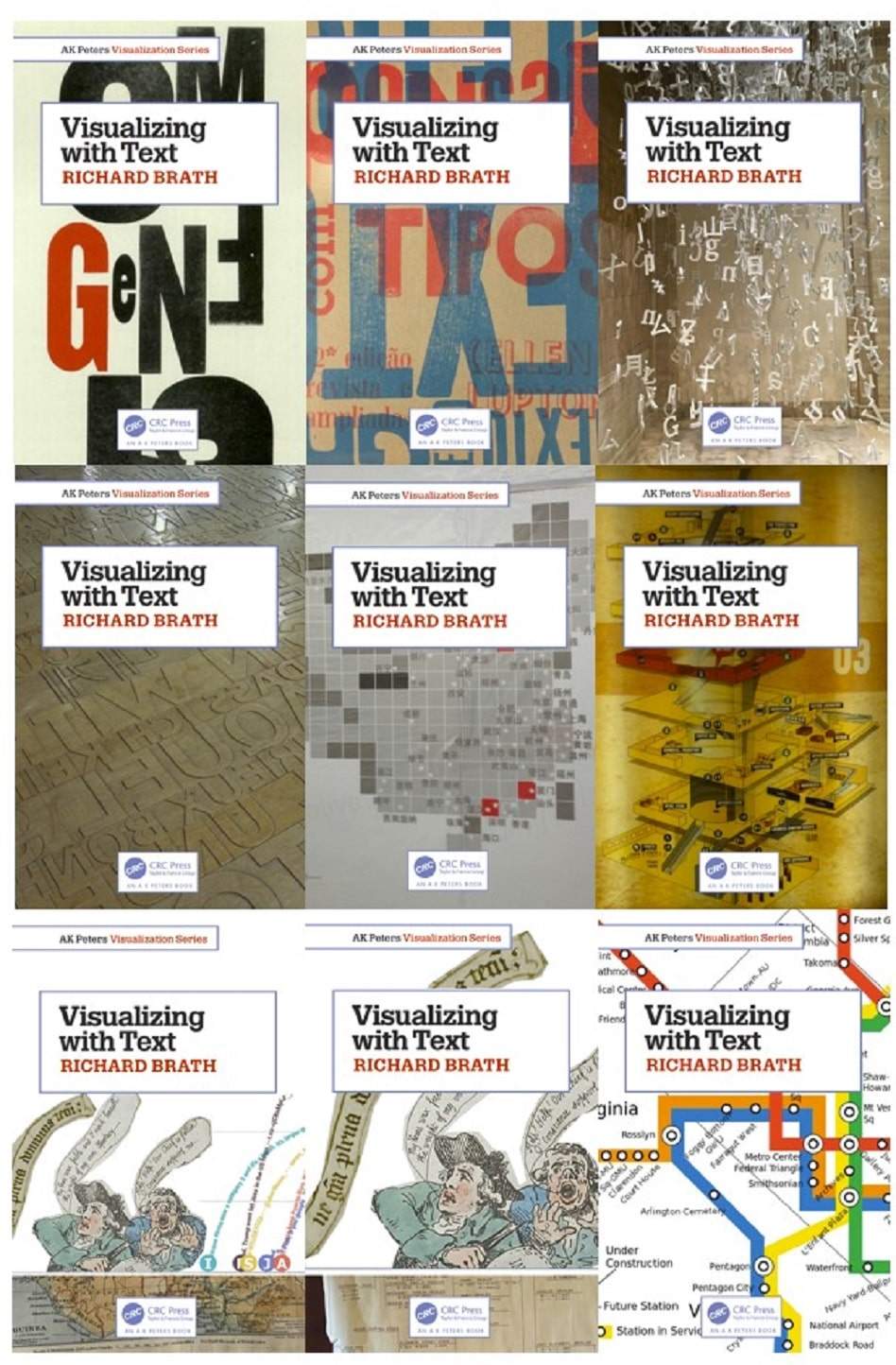 Based on the following blogs:

These images have kindly been provided by Richard Brath for inclusion in this blog post. 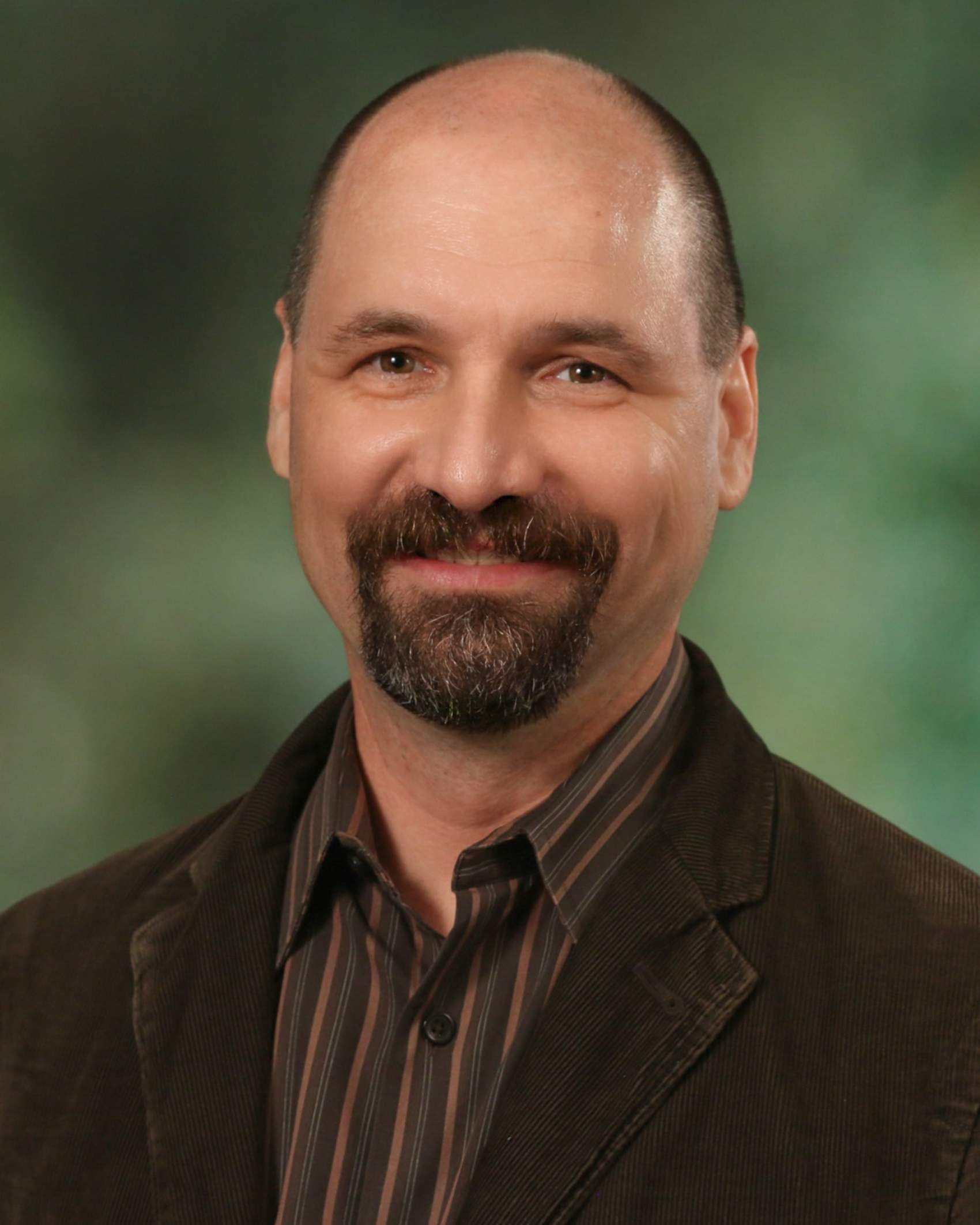 Richard Brath has been actively involved in the research, design, and development of data visualization and visual analytics since 1990. Richard originally acquired a degree in architecture and worked in industrial design, special effects, and 3D animation, before switching to visualization and creating one of the first interactive 3D financial visualizations on the web (1996). Richard is a partner at Uncharted Software, where his team creates a wide variety of visualizations, which are used in domains such as financial markets, professional sports, health care, journalism, and customer analytics.

Richard has a personal blog at richardbrath.wordpress.com and can also be found on Twitter: @rkbrath.

Visualizing with Text is included in the following series: