TALKABOUT was first developed in the early 1990s when I was working as a speech and language therapist in London, UK. I was particularly interested in social skills but was frustrated by two aspects of my work as a therapist. First, there was nothing in the literature to guide me on where to start intervention following assessment; and second, my experience showed me that I was not always successful in what I was trying to teach and I could not always predict which children were going to improve and which were not. I set about to solve these two problems over a period of four years.

I started my investigations at a college of further education where I was working with 60 students who had a mild to moderate intellectual disability. We assessed all of the young people I was working with using an adapted social skills assessment from the Personal Communication Plan by Alex Hitchings and Robert Spence – now published in Kelly (2000). The students were involved in this assessment which gave us some insight into their own awareness of their difficulties. From these initial results, we grouped students into their main area of need: body language, conversational skills and assertiveness. We evaluated success through retesting on the original assessment and also compared students with poor and good awareness of their needs.

In addition, we found that students who had poor self and other awareness struggled with all aspects of the work. From this, we established a hierarchy which forms the basis of the Talkabout resources. Over the next four years, we piloted this programme using different client groups and a group of willing therapists from throughout the UK. We all found consistently that the success of intervention increased if non-verbal behaviours were taught before verbal behaviours, and if assertiveness was taught last (Kelly, 1996).

This original hierarchy then formed the basis of the first Talkabout book (Kelly, 1996) but it has been adapted over the years to include self-esteem and friendship skills. The hierarchy now looks as follows. 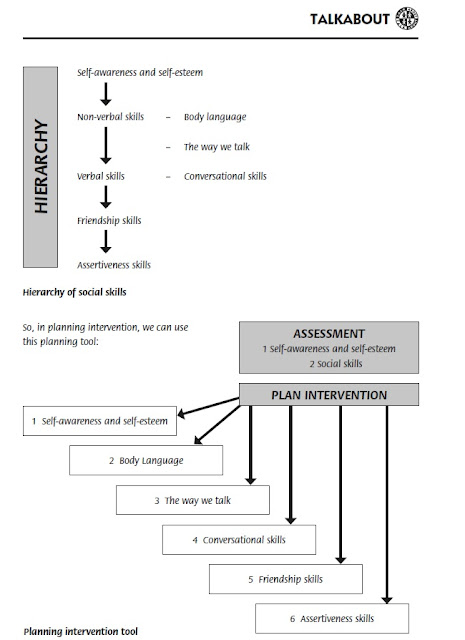 Using this hierarchical approach, teachers and therapists can start work with the person at a level that is appropriate to that person’s needs. They can then progress up the levels to enable the person to reach their full potential, ensuring that basic skills are taught before the more complex ones. So a student who needs work on all areas of his social skills would start work first on his body language skills and then would progress to working on his paralinguistic skills, then his conversational skills and, finally, his assertiveness skills.

Of course, success is not just about what you teach first; it is also down to how you teach it.