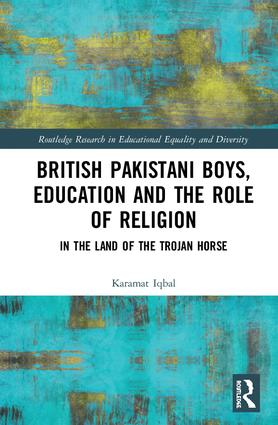 British Pakistani Boys, Education and the Role of Religion

In the Land of the Trojan Horse, 1st Edition

The book draws on research undertaken by the author in three British state secondary schools, to respond to the national policy on the education of ethnic minority children. It considers the meaning of education for Pakistanis, where religion plays an integral role, the gaps in education as well as the issue of representation - in governance and in the teaching workforce. The author concludes by discussing the possibility of responsive education better meeting the needs of Pakistani children by integrating Islamic religious education and education of the world.

British Pakistani Boys, Education and the Role of Religion

will be vital reading for academics and both undergraduate and postgraduate students in the fields of Education and Sociology and specifically those studying inclusion, equality and diversity, or Asian, Muslim or Pakistani education. It would also appeal to education practitioners, policy makers and community activists.

"This is a must read book. Iqbal's empirical evidence not only examines British Pakistani Boys but interrogates issues concerning mono and multi faith environments, gender issues and the realities of monoculture within the possibilities of multiculture. A key and important text for education and the wider social sciences for both undergraduate and postgraduate students."

"Iqbal opens the door on the complex connections between ethnicity, religiosity and education. Drawing on both his insider's knowledge and research expertise, he fleshes out how Pakistani and Muslim identities have been accepted, ignored and critiqued in Birmingham’s schools over recent decades; he thereby places recent controversies, such as the Trojan Horse Affair, within a nuanced account of the shifts in national and local policy and practice. This book will be invaluable for anyone - whether academic or professional, and whether in the UK or beyond - interested in these increasingly problematised debates across education."

Chapter 2: In the Land of the Trojan Horse

Chapter 3: A Note on the Research

Chapter 4: Meaning and Importance of Education for Pakistanis

Chapter 5: The Gaps in Education

Dr Karamat Iqbal is an Education and Diversity Consultant and Director of the Jericho Foundation.