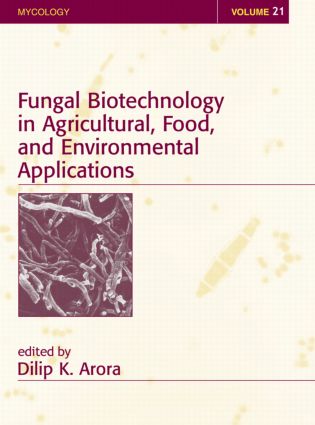 Contributions from 80 world-renowned authorities representing a broad international background lend Fungal Biotechnology in Agricultural, Food, and Environmental Applicationsfirst-class information on the biotechnological potential of entomopathogenic fungi and ergot alkaloids, applications of Trichoderma in disease control, and the development of mycoherbicides. Additional topics include fungal control of nematodes, control of plant disease by arbuscular mycorrhizal fungi, strategies for controlling vegetable and fruit crops, molecular biology tactics with mycotoxigenic fungi and the development of biofungicides, production of edible fungi, fermented foods, and high-value products like mycoprotein.

“Apart from the high quality and current relevance of the scientific content of this volume, an additional strength lies in the fact that (as well as extolling the virtues) the authors acknowledge the assumptions and limitations underlying the application of their specific tools…this highly readable volume represents an excellent resource for undergraduates, graduate students, and teachers…”

“This volume represents a valuable resource for students, teachers and researchers… .In general, the quality of the papers is high, as is the overall presentation.”

“This volume represents a valuable resource for students, teachers and researchers … I would recommend its purchase for department libraries such as plant science-related, food sciences, microbiology, agricultural engineering, environmental sciences, as well as university collections and, perhaps, by industry libraries. …”