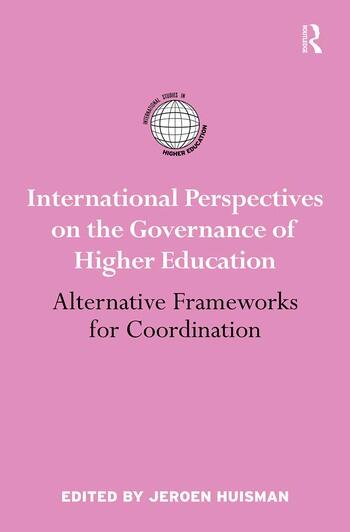 International Perspectives on the Governance of Higher Education: Alternative Frameworks for Coordination

Essential reading for policy makers, institutional leaders, managers, advisors, and scholars in the field of higher education, International Perspectives on the Governance of Higher Education analyzes how the governance of higher education systems has evolved in recent years. This volume is an authoritative overview with contributions from authors from the U.K., the Netherlands, Denmark, Portugal, Norway, Italy, Ireland, Austria, Germany, Canada, the U.S. and Australia.

Comprehensive in coverage, this volume explores how the use of disciplinary approaches and frameworks, particularly from political science, public administration and public policy help us to understand better the coordination of higher education systems. This is an arduous but gratifying challenge, given the current complexity of multi-actor and multi-level steering in higher education, rife with unintended outcomes and unanticipated dynamics.

The edited volume looks to:

Chapter 1: Coming to terms with governance in higher education, by Jeroen Huisman

Part I: The Application of Governance Frameworks

Chapter 2: Governance in Higher Education: An Analysis of the Italian Experience, by Gianfranco Rebora and Matteo Turri

Chapter 5: Prometheus (on the) Rebound? Freedom and the Danish Steering System, by Susan Wright and Jakob Williams Ørberg

Chapter 7: Policy Networks and Research on Higher Education Governance and Policy, by Lucia Padure and Glen A. Jones