International Trends in University Governance
Autonomy, self-government and the distribution of authority 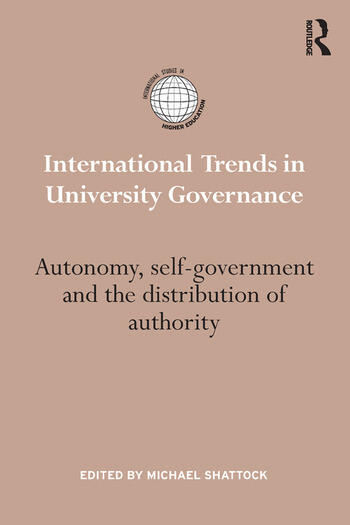 International Trends in University Governance: Autonomy, self-government and the distribution of authority

Governance is becoming increasingly important in universities just as it is in the wider world of commerce and banking. Historically, universities were run by their academic communities but as mass higher education has taken root, as university research has become a critical element in national economies and as the demand for more accountability both financial and in academic performance has grown, pressure has mounted for a ‘modernisation’ of governance structures.

One aspect of ‘modernisation’, particularly important in many European systems, and in Japan, has been the decision by governments to give institutions greater autonomy, more control over their budgets and legal responsibility for the employment of their staff. International trends to introduce greater competition between institutions, to encourage greater institutional differentiation and give greater play to market forces has led to an emphasis on leadership, a more systematic involvement of external stakeholders and a more ‘corporate style of governance. At the same time this has often led to a sense of loss of collegiality, a redistribution of authority and a growing gap between the ‘centre’ and the ‘periphery’ within universities.

This book analyses governance change in nine major higher education systems, Australia, Finland, France, Germany, Italy, Japan, Norway, the UK and the USA, each account being the result of independent research by a leading authority in the field and describes how a convergence of governance structures has been mediated by the historical, cultural, political and social characteristics of the different systems. Michael Shattock is a leading authority on university governance; this study offers the most up to date account of governance reform in a range of higher education systems, an analysis of the common trends and an assessment of their impact on the idea of a university. It will be essential reading for academics, postgraduates and practitioners in higher education.

Michael Shattock is a Visiting Professor in the Centre for Higher Education Studies at the Institute of Education, University of London; he was previously Registrar of the University of Warwick. He is a leading authority on university governance and has published over 90 articles and chapters and 10 books, the most recent of which are: Managing Good Governance in Higher Education (2006), Managing Successful Universities (2010) and Making Policy in British Higher Education 1945–2011 (2012). He is widely known for his international advisory work in the field of governance and management of systems and institutions of higher education.

"In chasing international trends, this book contributes to the literature by drawing upon the seismic transformations of the last decade to analyse the impact upon national traditions (and regional models) of university governance." - Jen Tsen Kwok, Australian Universities' Review, September 2015