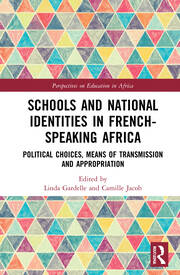 Schools and National Identities in French-speaking Africa showcases cutting-edge research to provide a renewed understanding of the role of schools in producing and reproducing national identities. Using individual case studies and comparative frameworks, it presents diverse empirical and theoretical insights from and about a range of African countries.

The volume demonstrates in particular the usefulness of the curriculum as a lens through which to analyse the production and negotiation of national identities in different settings. Chapters discuss the tensions between decolonisation as a moment in time and decolonisation as a lengthy and messy process, the interplay between the local, national and international priorities of different actors, and the nuanced role of historiography and language in nation-building. At its heart is the need to critically investigate the concept of "the nation" as a political project, how discourses and feelings of belonging are constructed at school, and what it means for schools to be simultaneously places of learning, tools of socialisation and political battlegrounds.

By presenting new research on textbooks, practitioners and policy in ten different African countries, this volume provides insights into the diversity of issues and dynamics surrounding the question of schools and national identities. It will be of particular interest to scholars, researchers and postgraduate students of comparative and international education, sociology, history, sociolinguistics and African studies.

List of illustrations  Acknowledgements  Contributors  1. National identities and the curriculum: socio-cultural legacies and contemporary questions  Camille Jacob & Linda Gardelle  Part 1 Continuities and discontinuities in the intermeshing of schools and identities  2. The emergence of the national in Francophone West African teacher education: the case of the normal school of Dabou, Côte d’Ivoire (1937-1975)  Jean-Lémon Koné  3. Conditional belonging to the Senegalese nation-state? School, state and society in Casamance (19th-20th centuries)  Céline Labrune-Badiane  4. The role of schools in nation-building in Djibouti  Daher Ahmed Farah  5. Giving a Senegalese identity to education: issues, challenges and aims of nationalist demands, from independence to today  Mamadou Yéro Baldé  6. An examination of Negritude in textbooks: A content analysis approach to the textbooks of History-Geography and French in upper primary school in Côte d’Ivoire  Kabran Aristide Djane  Part 2 Language and nation-building: classroom practices, policies and research paradigms  7. Teachers’ curriculum contextualisation in an overseas French territory: how can local specificities be acknowledged within the education system?  Fanny Dureysseix  8. Defending national identity or improving learning outcomes? The ELAN initiative to introduce national languages in primary school in Benin, between pedagogical and political issues ABDEL RAHAMANE BABA-MOUSSA AND PAULINE JARROUX  9. Arabic teaching in state schools in Morocco: identity literacy and the endeavour to construct a unified national and religious identity among pupils  Chloé Pellegrini  10. Identity (re)construction and the culture of resistance in Algerian textbooks of French and English  Amira Zouaoui  11. Colonial languages: an appropriate lens to drive educational reforms? The case of the islands of the Indian Ocean  Rada Tirvassen

Linda Gardelle is maître de conférence HDR (Reader) in Educational Sciences at the École Nationale Supérieure des Techniques Avancées (ENSTA Bretagne) in France. She is interested in the construction of national and professional identities through the curriculum. In Africa, her research is mainly conducted in Mali, Algeria and Morocco.

is a Postdoctoral Fellow at the University of Portsmouth, working on discourses and practices of English in Algeria and Mauritania. She is particularly interested in how the politics of language at the global level interact with local and national understandings of decolonisation, identities, security and "development" in countries historically considered as "French-speaking".