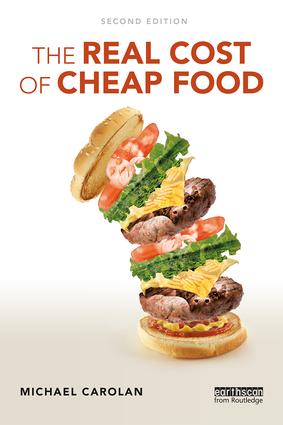 The Real Cost of Cheap Food

This thought-provoking but accessible book critically examines the dominant food regime on its own terms, by seriously asking whether we can afford cheap food and by exploring what exactly cheap food affords us. Detailing the numerous ways that our understanding of food has narrowed, such as its price per ounce, combination of nutrients, yield per acre, or calories, the book argues for a more contextual view of food when debating its affordability. The first edition, published in 2011, was widely praised for its innovative approach and readability.

In this new edition the author brings all data and citations fully up to date. Increased coverage is given to many topics including climate change, aquaculture, financialization, BRICS countries, food-based social movements, gender and ethnic issues, critical public health and land succession. There is also greater discussion about successful cases of social change throughout all chapters, by including new text boxes that emphasize these more positive messages.

The author shows why today's global food system produces just the opposite of what it promises. The food produced under this regime is in fact exceedingly expensive. Many of these costs will be paid for in other ways or by future generations and cheap food today may mean expensive food tomorrow. By systematically assessing these costs the book delves into issues related, but not limited, to international development, national security, healthcare, industrial meat production, organic farming, corporate responsibility, government subsidies, food aid and global commodity markets. It is shown that exploding the myth of cheap food requires we have at our disposal a host of practices and policies.

"Michael Carolan is one of the world’s leading scholars in the political economy of food and farming. In this book he harnesses his considerable skills as a social scientist and public intellectual to argue that the global food system is not only based upon questionable and shaky, biological, economic and social foundations, but also fails to deliver what it promises – nutritional, healthy and affordable food for a burgeoning world population. Professor Carolan presents a comprehensive and compelling analysis of the forces shaping current food and farming trajectories, the winners and losers in the food system, the options available to those wanting to challenge and, ultimately, to overhaul today’s unsustainable global foodscape." - Geoffrey Lawrence, Emeritus Professor of Sociology, University of Queensland, Australia

"A very readable romp throughthe breadth and depth of externalities generated by capitalism’s demand for cheap food." - Raj Patel, Research Professor, Lyndon B Johnson School of Public Affairs, University of Texas at Austin, US, and author of Stuffed and Starved: From Farm to Fork the Hidden Battle for the World Food System

"With food continuing to comprise a declining share of household expenditure in rich and middle-income countries, a trend heralded by proponents as a vindication of the modern food system, Carolan provides a necessary wake-up call alerting us to the widely accumulating problems that conventional price calculations ignore. Almost encyclopaedic in range yet entirely conversational in tone, this book strikes just the right note in exploring how fundamentally flawed our ‘cheap food’ system is. Set to become a food student’s bible!" - Colin Sage, author of Environment and Food (2012), University College Cork, Republic of Ireland

Chapter 6: Cheap Food and the Environment

Chapter 7: Cheap Food…But at What Price?

Michael Carolan is a Professor in the Department of Sociology and Associate Dean for Research and Graduate Affairs, College of Liberal Arts, Colorado State University, USA. He is the author of several books including The Sociology of Food and Agriculture (Routledge), Cheaponomics: The High Cost of Low Prices (Routledge) and No One Eats Alone: Food as a Social Enterprise (Island Press).

Routledge Studies in Food, Society and the Environment

This series includes a wide range of inter-disciplinary approaches to food, society and the environment. It includes textbooks, research monographs and titles aimed at professionals, NGOs and policy-makers. Authors or editors of potential new titles should contact Hannah Ferguson, Editor ([email protected]).