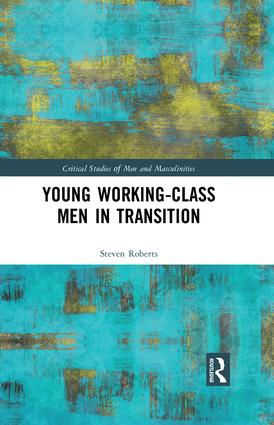 Young Working Class Men in Transition uses a unique blend of concepts from the sociologies of youth and masculinity combined with Bourdieusian social theory to investigate British young working-class men’s transition to adulthood. Indeed, utilising data from biographical interviews as well as an ethnographic observation of social media activity, this volume provides novel insights by following young men across a seven-year time period. Against the grain of prominent popular discourses that position young working-class men as in ‘crisis’ or as adhering to negative forms of traditional masculinity, this book consequently documents subtle yet positive shifts in the performance of masculinity among this generation.

Underpinned by a commitment to a much more expansive array of emotionality than has previously been revealed in such studies, young men are shown to be engaged in school, open to so called ‘women’s work’ in the service sector, and committed to relatively egalitarian divisions of labour in the family home. Despite this, class inequalities inflect their transition to adulthood with the ‘toxicity’ neoliberalism - rather than toxic masculinity - being core to this reality.

Problematising how working-class masculinity is often represented, Young Working Class Men in Transition both demonstrates and challenges the portrayal of working class masculinity as a repository of homophobia, sexism and anti-feminine acting. It will appeal to students and researchers interested in fields such as youth studies, masculinity studies, gender studies, sociology of education and sociology of work.

‘… fascinating and deeply enjoyable read; it provides significant contributions to a number of areas in academia and sets a high bar for future writings on working class masculinity.’

Global economic restructuring has rippled through the class and gender landscapes, disrupting old norms and creating new opportunities in its wake. But we've heard little about the particularly gendered experiences of working class boys and men. Until now. Steven Roberts has listened attentively and drawn a complex and resonant portrait. Carefully researched, artfully discussed, this is for the 21st century what Paul Willis's book was for the 20th.

In this book, Steve Roberts sensitively captures the experiences of working class young men and the impact of social and economic transformations. He expertly challenges pre-occupations with stereotypes of traditional men, by recognising the complex non-uniform ways young masculinities are being lived out in contemporary society. This ground-breaking book has been long over-due for those working in the fields of gender, work and young people.

This engrossing and thought-provoking monograph sets out to challenge many of the orthodoxies surrounding the representation of working class masculinities in academic research. The longitudinal nature of the study upon which the book is based, including fascinating insights gleaned from social media ethnography, allows for a nuanced picture of the everyday lives of working class young men to emerge, one which is suggestive of change and transformation in many respects. Set against a backdrop of increasing precarity and powerlessness amongst working class youth, Roberts’ book is a passionate call to take seriously ‘the missing middle’ in youth research."

With this book Roberts presents an impressive account of young working-class men’s lives. Impressive because of its sensitivity and attention to nuances in the empirical data; because of the theoretical ground it covers; and not least because of the intervention it poses by insisting on a positive story about young working-class masculinities. The book is essential reading for everyone interested in young people, gender relations and the potentials for social change.

'Overall, Young Working-Class Men in Transition was a delight to read, and to gain insight into what many would regard as the ordinary, everyday lives of young working-class men in Britain. It is necessary to explore and examine such ordinariness, something that is often ignored in scholars’ attempts to capture the exceptions and, as Roberts contends, vital for development of policy to support these men. A timely addition to the study of men and masculinities, this book is essential reading for its tying together of strong sociological methodology, application of social theory, and nuanced and sensitive exploration of young, working-class men.'

'One of the greatest strengths of this book is the commitment to addressing [working-class men's] lives in empathic ways, without letting this dampen the analytic and theoretical impact of the work.'

'a much-needed intervention into the field of critical studies on men and masculinities… [the book] provides a timely and important contribution to knowledge of, theorising on and work towards equality'

‘Roberts refreshingly utilises a comprehensive theoretical approach long overdue in the critical study of masculinities…this book has the potential to change the way we look at masculinities for generations, particularly with how masculinities scholars engage with theory to engender a more flexible, class-centred, and intersectional analysis of change and continuity in masculinities’

Luis Morales, University of Winchester, published in Journal of Sociology.

‘The book also provides a valuable counter-narrative to the dominant discourses that positions lived realities of young working-class males as epitomic of crises in the male identity as expressed in the catch-all term ‘toxic masculinity’. Fundamentally, it (re)assesses how far expressions of being male, young and working class is conforming to the cultural toxic masculinity zeitgeist, hence underlining the book’s timeliness’.

Dominant representations of working-class masculinity: the so-called ‘crisis of masculinity’ and the academic response

The so-called ‘crisis of masculinity’: A prominent, problematic, durable

Not exactly a ‘crisis’: Sociology’s reflections on changes, challenges and continuities to masculinity in new times

A relatively singular account of masculinity across variations in place

Making sense of men: outlining a framework for the study of contemporary masculinities

The constraints of HMT’s deterministic outlook

Making the most of Mannheim’s legacy: masculinities and the sociology

Bringing in Bourdieu: a fuller account of the social actor

The study context and methods

Looking back and looking forward at age 18-24: educational histories and aspirations

Critical moments in post-16 education engagement and drop out

Young working class men navigating the precarious world of work: identity in and out of the labour market

Sources of identity beyond the sphere of employment

Contemporary Working-class Masculinities and the Domestic Sphere: the diminishing significance of ‘the man of the house’

Attitudes and imagined futures at age 18-24

Walking the walk, not just talking the talk: Gender dynamics in the home,

Emotional disclosure online and offline: changes and continuities in forms of intimate expression among working-class men

Emotion in abundance: an unexpected observation?

‘It’s just between mates’: Making sense of misogyny and homosexually

Conclusion: Changing the tune, but not changing the record: Working-class masculinity in transition