The one major area of productivity improvement that is consistently not given enough consideration is how the leadership of organisations impacts productivity through their behaviours and values, and their ability to establish a sustainable performance enhancing culture.

The level of productivity in any organisation lies primarily with the CEO and the senior leadership team. That may sound obvious but in a large number of organisations, the accountability for productivity is pushed down to middle management. It is considered a management process issue rather than one for the leadership. Even when it is accepted as the responsibility of senior leaders, the focus is usually on capital investment and process while always highlighting causes outside the control of the organisation, such as market conditions, interest and exchange rates or full employment.

A Transpersonal Leader can be described as anyone that operates beyond the ego while continuing personal development and learning. They are radical, ethical, and authentic while emotionally intelligent and caring.

They are able to:

The behaviour and values of top leadership, and the culture they create, have a huge impact on the performance of each individual in organisations. In essence, this is attained by encouraging discretionary effort through focusing on the engagement of all the people in the organisation.

The discretionary effort and performance that each human being will provide if treated in the right way and thus fully engaged can be truly staggering. But for that to work sustainably and effectively, the behaviours and values have to be genuine and connected to a purpose for the organisation that is beyond the narrow benefit of the owners and top executives.

This does not mean that we should dispel with using financial and operational management to improve productivity but rather that it should be a more balanced approach. There is also a role for non-financial “benefit” programmes (a more collaborative term than “incentive”) that are consistent with creating discretionary effort rather than those used to counter poor leadership. For example, providing flexible working is more sustainably effective and constructive than courses to help people reduce their stress. 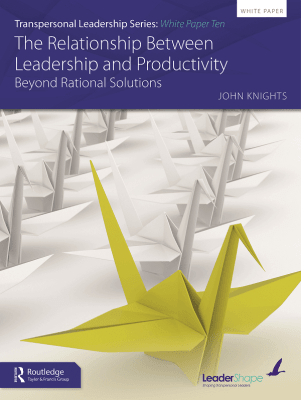