Chiral Organic Pollutants
Monitoring and Characterization in Food and the Environment

introduces readers to the growing challenges of chirality in synthetic chemicals. In this volume, contributors brilliantly summarize the characteristics of chiral pollutants to provide tools and techniques for effectively assessing their environmental and human health risks. Chapters cover recent research on the physicochemical properties, sources, exposure pathways, environmental fate, toxicity, and enantioselective analysis of chiral organic pollutants. Chiral Organic Pollutants also provides comprehensive discussions on the current trends in the synthesis and legislation of chiral chemicals.

The use of chiral synthetic chemicals such as pesticides, pharmaceuticals, personal care products, and halogenated flame retardants has significantly grown in the past 60 years. Hence, understanding the human and environmental health effects of chiral organic pollutants is crucial in the industry, academia, and policymaking. Chiral Organic Pollutants is an excellent textbook and reference for students, scientists, engineers, and policymakers interested in food quality, environmental pollution, chemical analysis, organic synthesis, and toxicology.

Analysis of Nanoplastics and Microplastics in Food,

Edmond Sanganyado, is an associate professor in the College of Science at Shantou University, China. He obtained his B.Sc. (Hons) in Applied Chemistry from the National University of Science and Technology, Zimbabwe, and his Ph.D. in Environmental Toxicology from the University of California Riverside under the direction of Dr. Jay Gan. Dr. Sanganyado worked as an analytical chemist at Kutsaga Research Station, where he gained expertise in chromatographic analysis. He was a postdoctoral research fellow at Shantou University before he was appointed an associate professor. Dr. Sanganyado has written over 30 peer-reviewed papers in journals such as Chemical Engineering Journal, Water Research, Environment International, and Environmental Pollution. His research focuses on the application of chromatographic and spectroscopic techniques to understand the behavior of chemical pollutants in aquatic environments. He contributed to our understanding of the implications of stereochemistry on the analysis, fate, and toxicity of chiral pollutants. In recognition of his contribution to sustainability, the International Union of Pure and Applied Chemistry awarded him the Periodic Table of the Younger Chemists. Dr. Sanganyado is the recipient of numerous awards, including the Fulbright Fellowship (2011), Zhujiang Postdoctoral Fellowship (2017), Shantou University Excellent Postdoctoral Fellowship (2018), IUPAC Periodic Table of the Younger Chemists Award (2018), and Shantou University Outstanding Young Talent (2019).

Basil K Munjanja received his BSc (Hons) in Applied Chemistry (2013) from the National University of Science and Technology, Zimbabwe. From 2013 to-date, he has authored thirteen book chapters on various topics such as Biopesticides, spectroscopy, and mass spectrometry, for CRC Press, Taylor and Francis in books namely Handbook of Food Analysis (3rd edition), Biopesticides Handbook, FIA book, and Chromatographic Analysis of the Environment, Mass Spectrometry Based Approaches (4th edition). All these books were under the editorship of Dr Leo M.L Nollet. He is an associate member of the South African Chemical Institute (SACI), and the Society of Environmental Toxicology and Chemistry (SETAC) Africa.

Leo M.L. Nollet earned an MS (1973) and PhD (1978) in biology from the Katholieke Universiteit Leuven, Belgium. He is an editor and associate editor of numerous books. He edited for M. Dekker, New York—now CRC Press of Taylor & Francis Publishing Group—the first, second, and third editions of Food Analysis by HPLC and Handbook of Food Analysis. The last edition is a two-volume book. Dr. Nollet also edited the Handbook of Water Analysis (first, second, and third editions) and Chromatographic Analysis of the Environment, third and fourth editions (CRC Press). With F. Toldrá, he coedited two books published in 2006, 2007, and 2017: Advanced Technologies for Meat Processing (CRC Press) and Advances in Food Diagnostics (Blackwell Publishing—now Wiley). With M. Poschl, he coedited the book Radionuclide Concentrations in Foods and the Environment, also published in 2006 (CRC Press). Dr. Nollet has also coedited with Y. H. Hui and other colleagues on several books: Handbook of Food Product Manufacturing (Wiley, 2007), Handbook of Food Science, Technology, and Engineering (CRC Press, 2005), Food Biochemistry and Food Processing (first and second editions; Blackwell Publishing—now Wiley—2006 and 2012), and the Handbook of Fruits and Vegetable Flavors (Wiley, 2010). In addition, he edited the Handbook of Meat, Poultry, and Seafood Quality, first and second editions (Blackwell Publishing—now Wiley—2007 and 2012). From 2008 to 2011, he published five volumes on animal product-related books with F. Toldrá: Handbook of Muscle Foods Analysis, Handbook of Processed Meats and Poultry Analysis, Handbook of Seafood and Seafood Products Analysis, Handbook of Dairy Foods Analysis, and Handbook of Analysis of Edible Animal By-Products. Also, in 2011, with F. Toldrá, he coedited two volumes for CRC Press: Safety Analysis of Foods of Animal Origin and Sensory Analysis of Foods of Animal Origin. In 2012, they published the Handbook of Analysis of Active Compounds in Functional Foods. In a coedition with Hamir Rathore, Handbook of Pesticides: Methods of Pesticides Residues Analysis was marketed in 2009; Pesticides: Evaluation of Environmental Pollution in 2012; Biopesticides Handbook in 2015; and Green Pesticides Handbook: Essential Oils for Pest Control in 2017. Other finished book projects include Food Allergens: Analysis, Instrumentation, and Methods (with A. van Hengel; CRC Press, 2011) and Analysis of Endocrine Compounds in Food (Wiley-Blackwell, 2011). Dr. Nollet’s recent projects include Proteomics in Foods with F. Toldrá (Springer, 2013) and Transformation Products of Emerging Contaminants in the Environment: Analysis, Processes, Occurrence, Effects, and Risks with D. Lambropoulou (Wiley, 2014). In the series Food Analysis & Properties, he edited (with C. Ruiz-Capillas) Flow Injection Analysis of Food Additives (CRC Press, 2015) and Marine Microorganisms: Extraction and Analysis of Bioactive Compounds (CRC Press, 2016). With A.S. Franca, he coedited Spectroscopic Methods in Food Analysis (CRC Press, 2017), and with Horacio Heinzen and Amadeo R. Fernandez-Alba he coedited Multiresidue Methods for the Analysis of Pesticide Residues in Food (CRC Press, 2017). Further volumes in the series Food Analysis & Properties are Phenolic Compounds in Food: Characterization and Analysis (with Janet Alejandra Gutierrez-Uribe, 2018), Testing and Analysis of GMO-containing Foods and Feed (with Salah E. O. Mahgoub, 2018), Fingerprinting Techniques in Food Authentication and Traceability (with K. S. Siddiqi, 2018), Hyperspectral Imaging Analysis and Applications for Food Quality (with N.C. Basantia, Leo M.L. Nollet, Mohammed Kamruzzaman, 2018), Ambient Mass Spectroscopy Techniques in Food and the Environment (with Basil K. Munjanja, 2019), Food Aroma Evolution: During Food Processing, Cooking, and Aging (with M. Bordiga, 2019), Mass Spectrometry Imaging in Food Analysis (2020), Proteomics in Food Authentication (with S. Ötleş, 2020) and Analysis of Nanoplastics and Microplastics in Food (with K.S. Siddiqi, 2020). 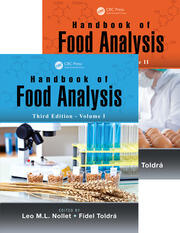 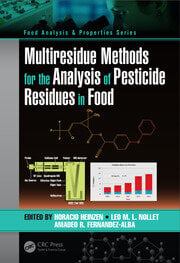 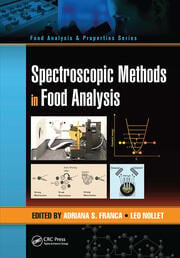