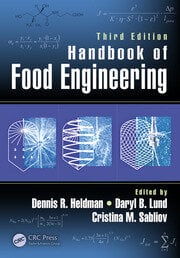 As the complexity of the food supply system increases, the focus on processes used to convert raw food materials and ingredients into consumer food products becomes more important. The Handbook of Food Engineering, Third Edition, continues to provide students and food engineering professionals with the latest information needed to improve the efficiency of the food supply system.

As with the previous editions, this book contains the latest information on the thermophysical properties of foods and kinetic constants needed to estimate changes in key components of foods during manufacturing and distribution. Illustrations are used to demonstrate the applications of the information to process design. Researchers should be able to use the information to pursue new directions in process development and design, and to identify future directions for research on the physical properties of foods and kinetics of changes in the food throughout the supply system.

The first four chapters of the Third Edition focus primarily on the properties of foods and food ingredients with a new chapter on nanoscale applications in foods. Each of the eleven chapters that follow has a focus on one of the more traditional unit operations used throughout the food supply system. Major revisions and/or updates have been incorporated into chapters on heating and cooling processes, membrane processes, extrusion processes, and cleaning operations.

2 Advances in Nanotechnology of Food Materials for Food and Non-Food Applications.

4 Phase and State Transitions and Transformations in Food Systems.

5 Transport and Storage of Food Products.

6 Heating and Cooling Processes for Foods

15 Engineering Considerations for Cleaning and Disinfection in the Food Industry

In 1992, Heldman was appointed Professor of Food Process Engineering at the University of Missouri and Leader for the Foods, Feeds and Products cluster in the Foods for the 21st Century program. Beginning in 1994, he served as Unit Leader for the Food Science and Engineering Unit, and in 1997, as Director for the Office of Value-Added Agriculture Outreach. From 1998 to 2004, Heldman was Professor of Food Process Engineering at Rutgers, the State University of New Jersey, and Director of the Cooperative Research & Development Program in the Center for Advanced Food Technology (CAFT). From 2004 to 2012, Heldman was a consultant involved in applications of engineering concepts to food manufacturing for educational institutions, industry and government. In August, 2012, Heldman joined the faculty at The Ohio State University as Dale A. Sobering Endowed Professor of Food Engineering. In 2016, he assumed responsibilities as Director of the Center for Advanced Processing and Packaging Studies (CAPPS).

Daryl B. Lund earned a BS (1963) in mathematics and a PhD (1968) in food science with a minor in chemical engineering at the University of Wisconsin-Madison. During 21 years at the University of Wisconsin, he was a professor of food engineering in the food science department serving as chair of the department from 1984–1987. He has contributed over 150 scientific papers, edited 5 books, and co-authored one major textbook in the area of simultaneous heat and mass transfer in foods, kinetics of reactions in foods, and food processing.

In 1988 he continued his administrative responsibilities by chairing the Department of Food Science at Rutgers University, and from December 1989 through July 1995 served as the executive dean of Agriculture and Natural Resources with responsibilities for teaching, research and extension at Rutgers University. In August 1995, he joined Cornell University as the Ronald P. Lynch Dean of Agriculture and Life Sciences. In January 2001, Dr. Lund became the executive director of the North Central Regional Association of State Agricultural Experiment Station Directors located at UW Madison. In this position he facilitated interstate collaboration on research and a greater integration between research and extension in the twelve-state region.

He has received numerous awards in recognition of personal achievements:ASAE/DFISA Food Engineering Award, Irving Award from the American Distance Education Consortium (ADEC), International Congress on Engineering and Food (ICEF) Lifetime Achievement Award, and Institute of Food Technologists (IFT) International Award, Carl R. Fellers Award, and Nicolas Appert Award for lifetime achievement. In 2016 he received the Lifetime Achievement Award from the International Union of Food Science and Technology (IUFoST). He is an elected fellow of the IFT, IUFoST, and charter inductee in the International Academy of Food Science and Technology (IAFoST).

Cristina Sabliov, Ph.D. is the Richard R & Betty S. Fenton LSU Alumni Professor in the Biological and Agricultural Engineering (BAE) Department at Louisiana State University and LSU Agricultural Center. She received a BS in Food Technology, two MS degrees in Agricultural Engineering and Chemical Engineering, and PhDs in Food Science, and Biological and Agricultural Engineering. Currently, she serves as a Graduate Coordinator in the BAE Department. Dr. Sabliov is leading an international renowned research program in the field of nanotechnology, specifically focused on polymeric nanoparticles designed for delivery of bioactive components for improved food quality and human health. She collaborates extensively across disciplines with colleagues from the US and abroad, to address complex research questions. To date, she has published 56 papers, cited more than 1,000 times. Dr. Sabliov has been recognized for the quality and impact of her work by LSU, as a recipient of Tiger Athletic Foundation Undergraduate Teaching Award, and Distinguished Faculty Award. The American Society of Agricultural and Biological Engineers awarded her the New Holland Young Researcher Award in 2011, and in 2016 Dr. Sabliov was inducted as a Fellow of the American Institute for Medical and Biological Engineering.