Fermented Foods and Beverages of the World

Fermented Foods and Beverages of the World

Did you know? It’s estimated that fermentation practices have been around since as early as 6000 BC, when wine was first being made in Caucasus and Mesopotamia. Today, there are roughly 5000 varieties of fermented foods and beverages prepared and consumed worldwide, which accounts for between five and forty percent of daily meals. Fermented Foods and Beverages of the World is an up-to-date review on fermentation practices, covering its storied past, cultural aspects, microbiology, biochemistry, nutrition, and functionality.

With contributions from 24 seasoned fermentation authorities, this book begins with a concise introduction to food fermentation – one of the oldest biotechnological processes – including its history and global varieties. After covering the various preparation techniques and culinary methods, the book addresses the microbiology-phenotypic and genotypic characterizations, the identifications of functional microorganisms, the functional and technological properties, and issues related to food safety.

The book also explores the functional properties of fermentation, how it improves product shelf life, ensures food safety, enriches nutritional supplements, and increases the probiotic functions in some foods. The rising popularity of probiotic and prebiotic foods and the health benefits they are known for are also discussed. Covering many undocumented minor or lesser-known ethnic fermented products, Fermented Foods and Beverages of the World is an all-in-one guide to global fermentation practices and consumption behaviors.

Dr. Jyoti Prakash Tamang is one of the leading researchers on fermented foods and beverages. He received the prestigious National Bioscience Award of Department of Biotechnology of Ministry of Science and Technology from the Government of India in 2005, and became a Fellow of Biotech Research Society of India in 2006. He has published more than 90 research papers in peer-reviewed international and national journals, in addition to his widely popular book Himalayan Fermented Foods: Microbiology, Nutrition, and Ethnic Values (CRC Press, 2010). Dr. Tamang is a Team Leader of Food Microbiology Laboratory at Sikkim Government College of Sikkim Central University in Gangtok.

Dr. Kasipathy Kailasapathy is an Associate Professor in the School of Natural Sciences at the University of Western Sydney in Hawkesbury, New South Wales, Australia. He is also the research leader for Probiotics and Encapsulated Foods Unit at the Centre for Plant and Food Science at the university. His research has focused on dairy fermented foods incorporating probiotic bacteria and prebiotic substances, health benefits, microencapsulation, immobilization of enzymes, active packaging, and bioactive peptides among others. Dr. Kailasapathy has received the prestigious Danisco International Dairy Science Award 2010 presented by the American Dairy Science Association honoring his international recognition as a world leading dairy scientist.

The book offers a refreshing reading to those interested in the fermentation of food and drinks as a general and basic source of information to suit mainly students studying food science and technology and those interested in the fermentation process in general. It also gives an insight to this issue to professionals working within the food industry.
—A. Kanekanian, in International Journal of Dairy Technology, February 2012 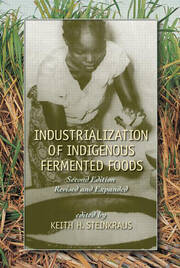