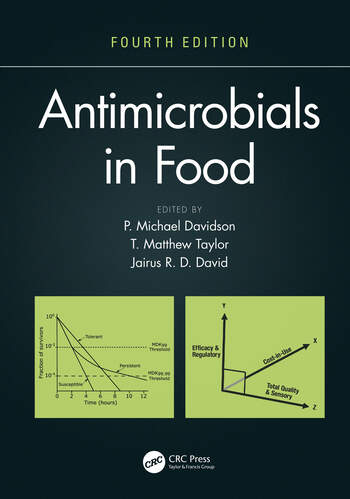 Fifteen years have passed since the 3rd Edition of Antimicrobials in Foods was published. It was arguably considered the "must-have" reference for those needing information on chemical antimicrobials used in foods. In the years since the last edition, the food industry has undergone radical transformations because of changes on several fronts. Reported consumer demands for the use of "natural" and "clean-label" antimicrobials has increased significantly. The discovery of new foodborne pathogen niches and potentially hazardous foods, along with a critical need to reduce food spoilage waste, has increased the need for suitable antimicrobial compounds or systems. Novel natural antimicrobials continue to be discovered and new research has been carried out on traditional compounds. These and other related issues led the editors to develop the 4th Edition of Antimicrobials in Foods.

In the 4th Edition, the editors have compiled contemporary topics with information synthesized from internationally recognized authorities in their fields. In addition to updated information, new chapters have been added in this latest release with content on the use of bacteriophages, lauric arginate ester, and various systems for antimicrobial encapsulation and delivery. Comprehensive revisions of landmark chapters in previous editions including naturally occurring antimicrobials from both animal and plant sources, methods for determining antimicrobial activity, new approaches to multifactorial food preservation or "hurdle technology," and mechanisms of action, resistance, and stress adaptation are included. Complementing these topics is new information on quantifying the capability of "clean" antimicrobials for food preservation when compared to traditional food preservatives and industry considerations when antimicrobials are evaluated for use in food manufacture.

Dr. Matthew Taylor is an associate professor of food microbiology in the Department of Animal Science at Texas A&M University, College Station, TX. He received the B.S. in Food Science and B.A. in Sociology in 2000 from North Carolina State University. He then obtained the M.S. degree in Food Science from North Carolina State University in 2003, and earned his Ph.D. in Food Science and Technology from the University of Tennessee-Knoxville in 2006. He joined Texas A&M University in June 2007. Dr. Taylor’s primary research interests are in the utilization and mechanisms of food antimicrobials to inhibit bacterial foodborne pathogens. Specifically, research is conducted to investigate and determine the manner by which food antimicrobials inhibit microbial pathogens. Additionally, research is conducted that seeks to overcome obstacles to the use of food antimicrobials in some product by the encapsulation of food antimicrobials. Dr. Taylor functions as lead instructor for undergraduate and graduate courses elaborating the microbiology of human foods. Dr. Taylor also regularly provides guest lectures for Texas A&M University courses, as well as teaching in food safety microbiology for members of the food processing industry and regulatory agency officers. Dr. Taylor is an active member of the Institute of Food Technologists and was previously recognized for excellence in service to the IFT Food Microbiology Division. He currently chairs and co-chairs various committees for the International Association for Food Protection, Phi Tau Sigma Honorary Food Science Society, and Gamma Sigma Delta Society. He sits on the editorial boards of multiple refereed journals. He also provides expert reviews in food safety microbiology for multiple journals publishing refereed food microbiology research. He has participated on over $33 million dollars in competitively funded and contracted research throughout his career.

P. Michael Davidson, PhD is a University of Tennessee (UT) Institute of Agriculture Chancellor’s Professor Emeritus and former Head (2005-2013) of the Department of Food Science & Technology at UT. Prior to retirement in 2016, he served on the faculty at UT for 30 years and was Professor in Food Science and Toxicology at the University of Idaho for 8 years. He earned a Ph.D. in food science at Washington State University in 1979, an M.S. in food science from the University of Minnesota and B.S. in microbiology from the University of Idaho. Dr. Davidson’s research program involves microbiological food safety. His primary research area in food safety has been characterizing regulatory-approved and naturally occurring antimicrobial food preservatives. He is co-editor of the book Antimicrobials in Foods, 3rd Edition along with John Sofos and Larry Branen. A secondary research area has been development and characterization of thermal and novel non-thermal processes to control pathogenic and spoilage microorganisms in foods. Dr. Davidson has authored or co-authored over 200 refereed journal articles, book chapters and books and given over 300 scientific presentations at national and international meetings, industry workshops and universities. He previously served as a Co-Scientific Editor for the Journal of Food Protection and on the Board of Directors of the Institute of Food Technologists (IFT). Davidson was presented with Honorary Life Membership in the International Association of Food Protection (IAFP) in 2018, the inaugural IFT Gerhardt Haas Award in 2017 for outstanding contribution to food safety, the Frozen Food Research Award from the Frozen Food Foundation in 2016, the IFT IAFP President’s Recognition Award in 2005 and the IFT Food Microbiology Division Distinguished Service Award in 2000. He was elected Chair of the IFT Food Microbiology Division in 1996 and Chair of the Food Microbiology Division of the American Society for Microbiology in 1993. For his contributions to microbiology, food science and technology, and food safety, Dr. Davidson was elected a Fellow of the American Academy of Microbiology, the Institute of Food Technologists and the International Association of Food Protection, respectively.

Jairus R. D. David, Ph.D., is a thought leader in the agro-food industry and authority on food preservation science, food safety and quality. Jairus has worked with the food industry on use of natural and clean label ingredients, especially antimicrobial preservatives for designing premium foods, and in developing microbiology and thermal processing food safety objectives and compliance for over 35 years, balancing applied research with process and quality optimization, and launch of innovative products. His industrial experience spans working for family-owned small companies and large corporations – highly regulated baby foods, infant formula, and consumer-packaged goods.

Jairus is a Certified Quality Manager (CQM) and Certified Quality Engineer (CQE), from American Society for Quality. He has participated in the leadership program at the Kellogg School of Management, Center for Creative Leadership, Stephen Covey Leadership Forum, and the Massachusetts Institute of Technology.

A Fellow of the Institute of Food Technologists (IFT), he is the recipient of IFT’s prestigious Industrial Scientist Award (2006). He is recognized for developing and influencing public health food safety policy on the use of honey in cereals and bakery products for the prevention of infant botulism in infants under 12 months of age. Currently, all honey and honey-containing food products in commerce carry a warning label "Do not feed honey to infants less than one year of age."